The Minister for Finance, Michael Noonan T.D., today welcomed the successful conclusion of the acquisition of €1.051 billion Bank of Ireland shares by a group of investors led by Fairfax Financial Holding from the NPRF. 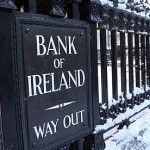 A total of 10.51 billion Bank of Ireland shares were acquired by the group of investors at 10c per share. As a result of this disposal the State’s holding in Bank of Ireland will decline from 36%, prior to the latest capital raise, to a little over 15%.

“As I noted on 25 July 2011, the commitment by a number of significant private sector investors to invest side by side with the State’s retained holding without any form of additional risk sharing by the State reaffirms the Government’s banking policy as announced on 31st March 2011.  It further underlines how we are successfully breaking the link between bank risk and the Sovereign.”